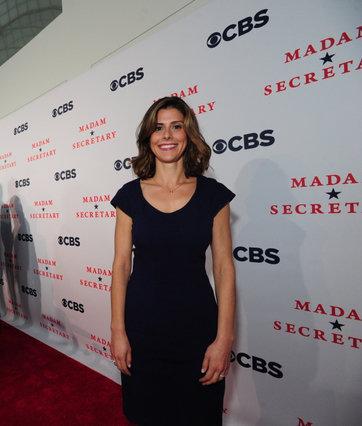 What will you be discussing with students at your alma mater, Charles E. Smith?

Part of the message is the value of Jewish education and the lessons that you learn about one’s own history, one’s culture and one’s religion. The experience at JDS takes you beyond the classroom and really sets you up for success down the line in college and the profession you decide to pursue. The curriculum is absolutely invaluable, not just in the amount of information you’re having to absorb but also teaches you how to multitask and balance all that information.

What inspired you to become a journalist?

I think what inspired me to become a journalist was telling stories, writing and talking to people, and listening to what people have to say. And to relay the information. I don’t remember what grade it was in, but back when career day came into school I remember saying that I wanted to be a roving reporter. I was always interested in that.

You worked at Bloomberg for more than a decade, and you started as a CBS News correspondent this past summer. Was there anything in particular that attracted you to the new position, or were you just looking for a general change?

I started at Bloomberg in 2003 in their global customer support office. I was looking to go into journalism after college. I went to the recruiting event at Columbia’s campus and [Bloomberg] said, we can’t hire journalists right out of college, but there’s this program that gives you an opportunity to learn about the company, shadow different departments and that would be a way to get a foot in the door in the news division. That’s the route that I went. I was in global customer support for eight months and then moved to the TV operational side. I was a production assistant, then a segment producer and then an associate producer. So that started in 2004.

In 2006, I moved to Washington, D.C., and in 2007 I really started reporting. I enjoyed the production side of things, and now – being a television correspondent – it helped me understand what goes on beyond the reporting. There’s a whole team involved, and many people who take the information that you have and help turn it into a story that people can see and hear and consume for television. I wanted to do more reporting so I wanted to go into the print division of Bloomberg News. That was in 2006. And then in 2007 I had the opportunity to cover Barack Obama’s presidential campaign. This was when everyone was betting on Hillary Clinton being the Democratic nominee. My boss and mentor Al Hunt really saw it as an opportunity for me to get a chance to cover the presidential campaign, thinking that the experience covering Barack Obama would set me up to cover the next presidential cycle in 2012.

You’ve covered both of Obama’s campaigns, attended his trips to China and Israel, and also covered the White House the night Osama Bin Laden was killed in 2011. What’s been the most exhilarating moment in your career so far?

Definitely the secret trip to Afghanistan the year after Osama Bin Laden was killed. It was remarkable. It was shrouded in secrecy. The private jets show up at Andrew’s Air Force Base at 10 p.m. You can’t tell anybody, not even your family, where you’re going. You can’t even say you’re going to be gone. We showed up on a Monday night. You have to hand over all your communications devices – your phones, your computers. You go through a security sweep. You’re put on a bus, driven to an airport hangar where you get on Air Force One. All the shades are down and you don’t even see the president get on the plane. You only know he’s on the plane because you start moving. The next time you’re in fresh air again is when you’re in Afghanistan. We flew in helicopters over to Kabul to the presidential palace where the president met with Hamid Karzai. Then you get right back on the helicopters and go back to the air force base. You’re there for a few hours while the president greets soldiers. He delivered a speech to the nation that night. We ran back onto Air Force One just as the sun was coming up because for security reasons, the president couldn’t be there when the sun was up. We left on a Monday night and were back by Wednesday at noon.

I was definitely very nervous. When people see an interview on television, they just see a correspondent interviewing the president of the United States or top-level officials. It’s not just you. There’s a whole team that goes into the questions, batting around ideas. What are the kinds of answers that will make news? If we ask him this, what’s he likely to say? If he says that, what is the follow-up question? There are hours and hours of planning.

What about working in D.C. makes your career here fulfilling?

You’re at the world’s power center. So you’re constantly interacting with people whose decisions are shaping the policies that directly affect our lives. It’s a pretty dysfunctional power center right now, but maybe that makes it even a more interesting story.

If you could get an interview with anyone, who would it be and why?

This is pretty dark, but I’d really love to interview an ISIS fighter. I know it sounds dark. But there is evil in this world and there is an evil inherent in this organization. As crazy as it sounds, I want to understand that more and understand how that is created in a person – how such hatred can exist to lead to the atrocities that we’re seeing. I’d love to have something a little more uplifting as well.

In the 2008 campaign, Annie Leibowitz said that her favorite pictures to take and images to capture were of the people in the crowd and to photograph and capture their expressions and feelings. To me, that’s really what journalism and storytelling is all about. Ultimately it’s what happens with the policies and how it directly affects the people on the ground who are listening and watching.

Journalism ultimately is meant for their benefit, not the benefit of the individual we’re covering. Who I would love to talk to wouldn’t necessarily be any one individual by name, but just understanding the way these people think. I’ve also been covering [ISIS] a lot recently, and it’s where my mind-set is.