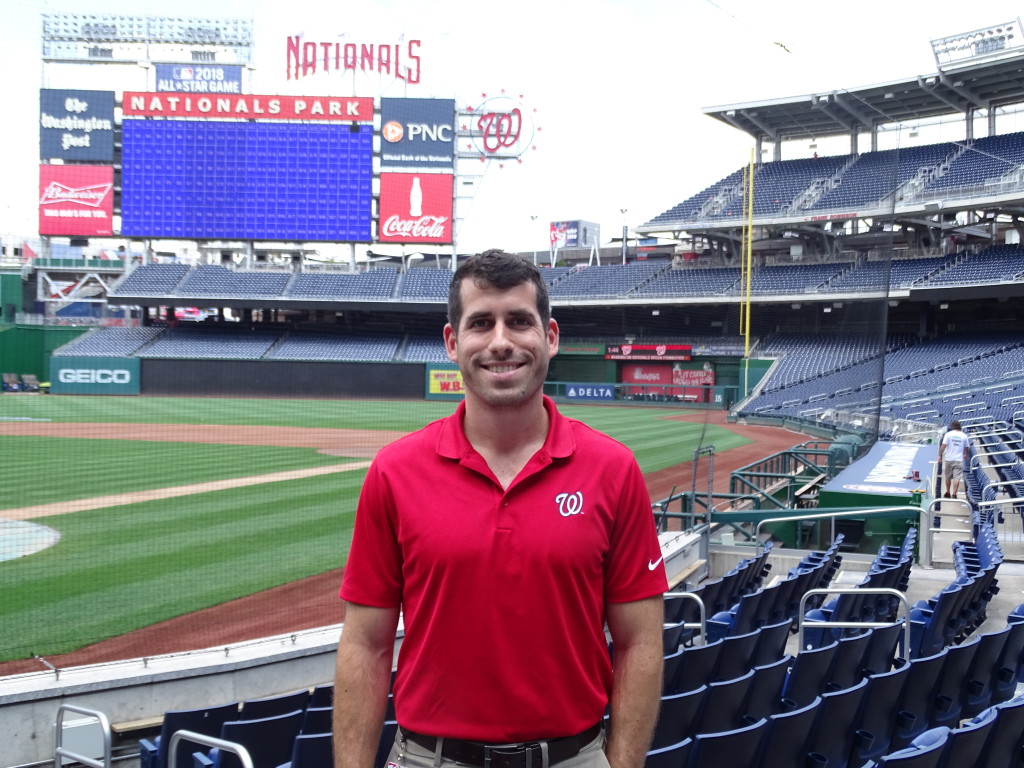 They say that baseball is a game of math. It certainly is for Lee Mendelowitz. Mendelowitz, 30, is a data analyst for the Washington Nationals, helping crunch the numbers that determine how the National League East’s first-place team can improve. Mendelowitz holds degrees in math, engineering and statistics from Cornell University and the University of Maryland. Since 2013, he has also maintained the website dcmetrometrics.com, which keeps track of all escalator and elevator outages in the WMATA system.

What attracts you to baseball?

I was 10 years old in 1996, and my team at the time, the [New York] Yankees, won the World Series, so that certainly didn’t hurt in terms of being a baseball fan. But I also loved to play baseball. Maybe it’s different than a lot of the other team sports because there’s the individual aspect, but it still takes a team to put hits together, to score runs, the whole team playing good defense to win games. So you still have that team aspect and you have that individual aspect, and it makes it amenable to analysis. You can break the game down to its individual components and try to make sense of it.

What are your job responsibilities?

We try to make use of our baseball data sets that we have in house to make the best informed decisions on all fronts. So that includes in-game strategy. That includes roster decisions, evaluating talent of the players. We have a lot of data sets in house that aren’t publicly available, so we try to make use of those whenever we can. Right now we have two analysts in house, and we have two developers. Because we’re a small group here, we do a little bit of everything, from maintaining our databases, importing data sets, so that maintenance work takes up a lot of time.

What’s the formula for success on the field?

I don’t think there’s any one formula. What we try to do is understand where the value is when it comes to putting the best team together and making the best decisions. But there’s no magic formula that’s going to win it all. As you’ve probably seen, in baseball anything can happen in any single game, especially in the playoffs. But there’s definitely not one silver bullet that wins it all.

What made you decide to start DC Metro Metrics?

It started with a Twitter account called Metro Escalators. I would tweet every time an escalator was broken or got fixed. And I thought that would be kind of a fun thing to do. It’s kind of a form of data visualization. And the reason why I did it was that I had gotten to a point as a programmer where I could build such a thing. I could write some code that would tweet automatically. That would query Metro for data, tweet in real time, and deploy that code in the cloud so it would run 24/7.

For me that was a personal challenge. I had never done anything like that before. And then from there it got a lot of buzz and people were interacting with the Twitter account and it kept growing. I built a website that would track the historical data. Once a minute, 24/7 for the last three years or so, if you check the list of escalator outages you notice the oldest escalator outage disappears from that list.

Does Washington Metropolitan Area Transit Authority use it?

I haven’t gotten any official acknowledgments from WMATA that they use it, but individual employees have contacted me and asked me for some of the data. Some of the mechanics who repair the escalators use the website as well.

What do you think about the Nationals’ success this year?

I think it’s great, and the way the roster looks, we’ll be a successful team for years to come. It started with the drafting and trades. There was a period of time when the Nationals weren’t very good, and the draft picks that were made in those years of Stephen Strasburg, Bryce Harper, Anthony Rendon, really the core of the team that’s primed for success now and will be in the next few years.”