Nira Dayanim, 21, is a junior at the University of Maryland, majoring in history and journalism. She’s the editor-in-chief of Mitzpeh, the university’s independent Jewish newspaper. She’s also musical director of Rak Shalom, an all-gender Jewish a capella group, and a college writing fellow at the online Jewish publication Hey Alma. In her free time, she writes songs, plays the guitar and takes photos.

What brought you to U-Md.?
My mom’s family is from the area. She grew up in Kemp Mill and Potomac. She went here, along with my uncle from my dad’s side. My two brothers also went to U-Md. So there are a lot of family ties. The Jewish community here is really vibrant, which is important to me because I grew up in an Orthodox community. And the journalism school at Maryland is really great.

How do you contribute to U-Md.’s Jewish life?
I run Mitzpeh, the Jewish student newspaper. We report on issues that affect Jewish students, look at news through a Jewish lens and give Jewish students a chance to write about their perspectives. It’s really about giving our community a voice and working to develop nuance in people’s understanding of the Jewish community. Jewish journalism also has a long and rich history, so I feel pretty lucky to be able to help bring that to life
on my campus.

I’m also really active in Kedma, which is the Orthodox Jewish community here. I like to think I add pizzazz to Kedma paint nights by gracing them with
my presence.

At Rak Shalom, I’m the musical director. I basically make sure songs get arranged, teach music and dynamics to the group, provide vocal guidance and help coordinate which songs we sing at gigs. We sing a mixture of Israeli pop, traditional Jewish medleys and American pop. And we’re actually going to be recording an album at the end of the school year.

What do you planning on doing, career-wise?
I’m really passionate about people’s stories. And I love to write. That’s why I decided to study journalism. I think that ties in really well with history, which has given me the knowledge and context to understand how a story turns out the way it does. I’m not sure what I specifically want to do, there’s a lot of directions, but I want to follow that interest.

What’s your favorite story you’ve ever written?
I wrote a story for Mitzpeh about a mother-daughter duo that started a cooking show for college students in the midst of the pandemic because the daughter was immunocompromised and wasn’t able to return to in-person school. This was in the first couple months of my freshman year. I remember thinking it was really cool to get to hear from people that I would never meet otherwise. It was especially interesting to hear the ways they found to make life meaningful during such a confusing time. It was
really sweet.

What’s your favorite family tradition?
My mother is Ashkenazi and comes from a traditional Reform background. My father is from Iran; he escaped in 1979 during the Iranian Revolution. So, in my house, we try to find ways to incorporate those two sides of our Jewish identity. Every Rosh Hashanah, we have a seder where we read from these booklets my aunt made in English and Hebrew. My dad will often read along in Farsi with texts from Iran. It’s a Persian tradition to have a long seder with a lot of simanim [symbolic foods] on Rosh Hashanah. That’s probably my favorite tradition. Though we also hit each other with scallions on Passover which I think helps purge us of
family angst. 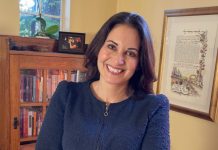 Closing a chapter at the Milton school with Ronit Greenstein