Robbie Shorr, 25, keeps coming full circle. A Potomac native, he moved back to the area after graduating from the Washington University in St. Louis with degrees in chemistry and Jewish studies. He’s about to begin his fourth year as a math teacher at the Charles E. Smith Jewish Day School in Rockville, where he himself was a student.

In 2018, Shorr met Lydia Sonenklar at Kesher Israel, a synagogue in Georgetown. By winter 2019, the two were dating, and a year later, they were engaged. They had a pandemic wedding just over a year ago.

What was it like to get married during the pandemic?

We got engaged in January 2020 and planned to get married that August. In May, we realized we had to give up on our original 200-person plan, which was not fun. We ended up getting married on the original date, Aug. 2, in my wife’s parents’ yard in Richmond, Va. We had 28 people there. Obviously, the reason we had to have a smaller wedding was a terrible thing, and there were some close friends who couldn’t make it, but it allowed for a unique and memorable experience, which was an unexpected bonus.

What attracted you to teaching math?

I was a math- and science-oriented guy in high school and majored in chemistry in college. I also worked as a counselor at the [Bender] JCC in Rockville for a long time. I realized that being a math teacher would allow me to combine spending time with kids with my passion for math.

What do you enjoy about working with the kids?

I like that I can have a relationship with them. I know who likes to do sports and who likes to do the play. I’m also able to hear their thoughts on everything that’s going on around them in the world today. I see them become passionate about things I would and wouldn’t expect.

For example, one student is very into basketball and slightly rowdy in class, but by getting to see him in minyan every day, I noticed he had a more philosophical, spiritual side.

Is there anything Jewish about the way you teach math?

It’s not super involved in the lessons, but I try to bring in stuff when I can. There’s a lot of math in the Talmud and the Jewish calendar. Everyone at JDS has the opportunity to be not just a teacher but a role model. I’ve been involved with the minyanim every morning. Kids in middle and high school are grappling a lot with their own Jewish identities. Being able to talk about that with them and lead Jewish programming has been really great.

What do you like to do in your free time?

I like baking because it incorporates some aspects of chemistry and also has the right balance of science and art. You get to experiment and try funky things. There’s also a hospitality aspect, and food in general can have a spiritual angle to it.

I also consume all media about Major League Baseball and the Orioles. Baseball is the sport with the most fleshed out statistical analysis, which obviously appeals to me as a math person. And that so much could happen or not happen on any pitch is very entertaining to me.

Where do you see yourself in five years?

I don’t have an exact timeline for this, but I would love to be an administrator at a Jewish day school one day. I’d have to teach less, and I like teaching a lot, but I want to have a more supervisory role. A lot of stuff in education is changing in terms of pedagogical innovation and Jewish identity in America, and I want to be able to help incubate abunch of ideas.

Know someone aged 40 or younger who has something important to say? Nominate them for a You Should Know interview. Email WJW Editor David Holzel at [email protected]

You Should Know… Ethan Litvin 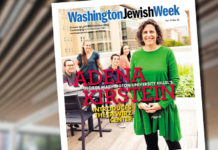