Shira Ben Ami, a senior at Maret School in Washington, has been an acapella singer since her freshman year. The 17 year old is a member of Congregation Beth El of Montgomery County’s teen acapella group, Marak Hayom (Soup of the Day), and an all-female school acapella group, Gracenotes.

When did you start doing acapella?

In ninth grade. I had never been into it before and I just auditioned with my friends. After I got into Gracenotes, I was like, wow I really love this! I had these girls from outside of school tell me that if I really like to sing and really like acapella I should look into Jewish acapella.

Who knew it was such a big scene! I had absolutely no idea. There are Jewish acapella groups at all these big colleges and all over the area. I joined Marak Hayom in the beginning of 11th grade. It was just so fun. I had no idea it was this big thing that everyone does.

Do you plan on doing acapella in college?

I definitely plan on it. I think it’s more intense in college so I hope to be able to do Jewish acapella, but it’ll just depend on my schedule and the different groups because they all have their own feeling and vibe. There’s something so unique about Jewish acapella. Nowhere else are you going to sing religious music in an acapella form.

How are your acapella groups different?

Gracenotes is all upper voices and Marak Hayom is soprano, alto, tenor and bass, so that’s the main difference. I do a lot of arranging, which has been challenging for me because I’ve been arranging since ninth grade just soprano and alto voice ranges. The other difference is meeting people who don’t go to school with you. It’s really nerve-wracking to join a group of people who I’ve never met before. That was stressful but it was really nice to meet new people who the only thing we had in common was that we were Jewish and liked to sing, which is not that common an overlap.

How do you select music?

There is a hazzan who coordinates our performances at Beth El, but the music we sing is completely selected by the teens and the arrangements are either arranged by us or they are passed down year to year. We are singing some arrangements from the founders of the group that we sing every year, as well as new songs we arrange ourselves.

How has Marak Hayom been affected by the pandemic?

It has been so difficult to keep it going online. Getting people to show up on Zoom calls after you go to school all week is so challenging. We are lucky that Marak Hayom is associated with Beth El. They’re going to continue to use our music for their virtual services, so we always have this opportunity to perform and put out virtual music, which not everybody has.

The way we do it now is we just record ourselves in our rooms by ourselves. It’s such a different vibe, because singing is really a community. I’m really impressed with the way that people have been going through it even when it can feel a little tedious and lonely at times.

What is your favorite memory from Marak Hayom?

My favorite memory was this performance. It was a bunch of different groups from the area. It was awesome because I’m Reform and I’m singing in a Conservative group and this was at a Modern Orthodox temple. It was awesome to think that I was 20 minutes from my house and experiencing Judaism in a completely different way. I’ve also made some of my closest friends through the group. My favorite thing has definitely been the different opportunities to meet people and in particular that performance.

Where did the name Marak Hayom come from?

I actually don’t know. It’s become lore at this point. The group was founded in 2004 and I think to an extent it was just Jewish sense of humor. My Israeli grandfather was so confused at first. He thought it was like an eating group, not a singing one, and was very confused. 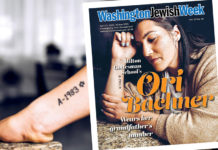