Best friends Alexandra Farber and Beila Ungar finish each other’s sentences and mirror one another’s body language. The pair, both young dancers on the rise in the competitive professional ballet world, spent time one Sunday morning this past month in Peet’s Coffee in Bethesda catching up. Peet’s was their after-class haunt back when they were wannabe “bunheads” at Maryland Youth Ballet, the elite training academy that has since moved to downtown Silver Spring.

These days both young women, who grew up in Bethesda and became fast friends in elementary school at the Charles E. Smith Jewish Day School in Rockville, are beginning careers as professional ballet dancers. Farber is on contract as a member of the corps de ballet at Texas Ballet Theater in the Dallas/Fort Worth region, while Ungar just late last month moved to Copenhagen where she will be a member of the corps de ballet of the Royal Danish Ballet, working year-round in this government-supported company.

Both young women began dance lessons as preschoolers and each found her way to the Maryland Youth Ballet, with its reputation for turning out professional dancers of the highest caliber. These days both Farber and Ungar have been proudly added to the studio’s growing list of former students who have turned pro in one of the most competitive and demanding careers in the arts. 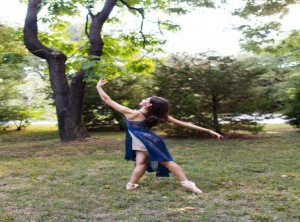 Asked when she knew ballet was going to become her career, Ungar recalled her experiences performing with her peers at Wolf Trap’s Theatre in the Woods, a summer educational program that offers live performances for children and their families and caregivers.

Ungar was about 11 or 12 and a member of MYB’s summer festival workshop, which prepped the ballet students for being comfortable performing onstage. “We did Carolyn Goes to the Circus and after we had a Q&A with the children in the audience,” Ungar said, “I remember somebody asked, ‘How many of you want to be professional dancers?’ Seriously, I had never really thought about it before that moment, but all of a sudden I felt like that was what I wanted to do.”

For Farber, it just never occurred to her that she wouldn’t dance. Her mother, Eve Farren Farber, noted that “being a dancer is simply who she is.”

While navigating the strenuous, time-consuming and emotionally and physically draining ballet world – where even students as young as 9 or 10 spend up to 15 hours a week in lessons and then return to the studio for many long Saturdays for rehearsals of an annual Nutcracker production or other performance – neither dancer has lost her deeply rooted connections to Judaism.

Beyond their love of dance, both girls have Jewish family trees populated with rabbis, scholars and the Jewishly observant.

Farber’s uncle is Rabbi Seth Farber, director of ITIM, the Jewish Life Information Center in Israel. She is also a descendent of the Chatam Sofer, a 19th-century Talmudic scholar. Ungar’s grandfather is Rabbi Emanuel S. Goldsmith, while her uncle is Rabbi Richard Marker, and her mother Rachel Goldsmith is a cantor.

Today, even as professional ballet dancers, both young women find ways to keep connected to their Judaism.

Ungar, who has apprenticed or danced with three different companies in three different cities during as many years, said she seeks out the Hillel in every city she moves to because, even though she isn’t enrolled in college, she knows she can meet Jewish peers there.

The demands of a pro ballet career often require working on weekends, evenings and, of course, religious holidays – Jewish and otherwise. While both women say only Yom Kippur is nonnegotiable at this point, they find other ways to infuse their lives in and outside the ballet company with Jewish practices and friends.

Farber keeps kosher, and Ungar said she always seeks out Jewish friends or family acquaintances on the High Holidays, no matter which city she finds herself in. As for raising a daughter who is both identifiably Jewish and a professional in the ballet field, Farren Farber noted that over the years her family has adjusted both expectations and levels of Jewish observance, not only for Alexandra, but for their other two daughters as well.

“It’s been fun, and it’s been challenging,” said Farren Farber, “Alex is so very passionate about dance. As parents, we had no idea what to expect, but we have [children] at home for such a short time that we do what we can. Dance is who she is, so we learned to be a very flexible and understanding of what is important to each of us. We can all have a Jewish life – we just have to custom make it.”

Back at the coffee house, Ungar and Farber, when asked about the longevity of their career options, both acknowledged the risks of injury and the typically short length of a ballet career.

“It’s hard for me to say because I’m just starting,” Ungar noted about the brevity of dancers’ careers. Farber added, “While in my heart I think I’ll retire when I’m about 30, all I really want to do is dance forever.”

Looking for the best Jewish news – in print and online – coming from the Washington, D.C. metro area and beyond? An indispensable source of political, international, scientific, arts and entertainment, community news, life cycle events, and more.  Turn to the Jewish news source of record in the nation’s capital since 1930: Washington Jewish Week.  Hurry and take advantage of our special offer: Get 18 months of Washington Jewish Week for just $55.00; that’s 6 additional months for the price of a year’s subscription!  Or choose our digital only  subscription for one year for only $18.   Hurry and subscribe today! Click here to subscribe.